As the global efforts intensify to promote sustainable development, the significance of battery materials recycling industry cannot be overstated in this era of hyper-consumerism. Owing to the increasing pace of industrialization and constant innovation in manufacturing processes, the over-production and over-consumption of consumer goods, electronics, automobile, and textile products has emerged as a major cause of concern across the world. Recycling and reusing materials to the maximum extent possible ensures less utilization of resources and production cost savings – a major factor that has defined the growth pattern of the global battery materials recycling industry in recent years.

In 2000, the United Nations envisioned the Millennium Development Goals (MDGs) to achieve a set of 8 important social priorities globally in a span of 15 years. The primary objective of setting these goals and the underlying theme of MDGs was to tackle the indignity of poverty and hunger. Although the achievements have been uneven, it cannot be denied that substantial progress has been made regarding the MDGs.

When it came to define a new set of targets after MDGs ran their course, the universal call for sustainable future and the need to carry on the momentum generated by the MDGs not only guided but went on to galvanize a process which laid the foundation of Sustainable Development Goals (SDGs) in 2015. In this context, it would be prudent to mention that the recycling sector – since the unveiling of SDGs – has received a major push by the United Nations since SDG 9 and 12 propose strengthening of the circular economy through recycling.

The United Nations Industrial Development Organization – which has been entrusted to promote best recycling practices – defines the circular economy as a system aimed at keeping the amount of residual waste as minimal as possible and to rely on recycled resources for the major share of the economic activity. This definition has been guiding the waste and materials recycling policies of the developed nations – a factor that has opened up lucrative growth opportunities for the battery materials recycling industry. 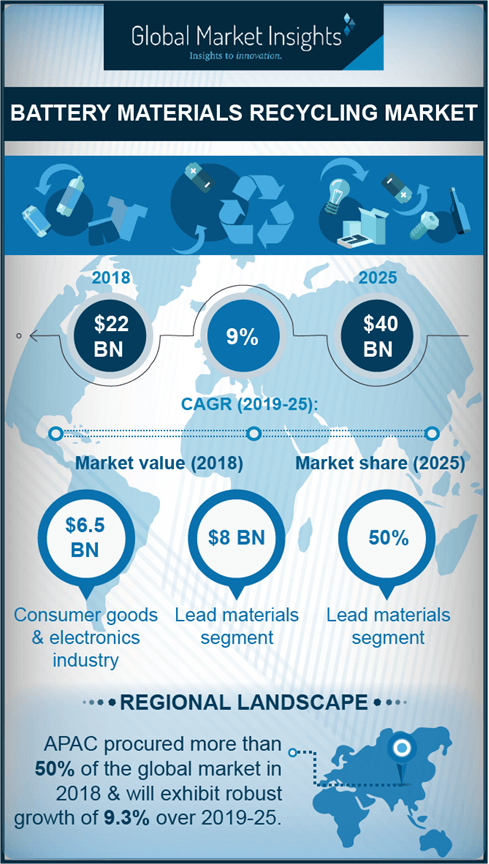 While taking into account the various legislations concerning the battery recycling processes across several nations, the directives formulated by the European Union stand out as they focus on protection, preservation, and improvement of the quality of the environment by minimizing the adverse impact of batteries. To put things into perspective, about 800,000 tons of automotive batteries, 160,000 tons of consumer batteries, and 190,000 tons of industrial batteries enter the European Union, presenting a massive business opportunity for the regional battery materials recycling market.

Globally, lead acid battery market size has been estimated to cross USD 75 billion by 2024. As of today, more than 85 percent of lead is utilized in the manufacturing of lead acid batteries across the globe, while about 100 percent of that volume is fairly easy to recover and recycle. Extracting and recycling lead has commendable environmental advantages as it lowers the burden of a hazardous waste on the natural resources.

The massive uptick in the number of lead recycling initiatives across developed nations can be attributed to the reasonable cost and energy efficient recycling process. Moreover, the high rate of lead recycling and its reuse is in line with the idea of sustainable development which promotes a circular economy, given that lead is the major material being recycled owing to its vast application in the automotive sector. In fact, according to estimates, lead acid battery recycling would account for over 50 percent of the overall battery materials recycling industry share by 2025.

Various governments and regulatory institutions across the world believe incorporating electric vehicles in the transportation systems is among the most practical solutions towards a sustainable mode of commuting and reducing emissions. Therefore, the production of electric vehicles has increased and so has the demand for lithium ion batteries. The material’s significance has increased tremendously in the last half a decade or so – as per estimates, lithium ion battery market size is expected to cross USD 60 billion by 2024.

In this scenario, where lithium ion batteries are critical in ensuring mass adoption of electric vehicles, the recycling rate of lithium can be termed as abysmally low as it currently stands at barely 5 percent in developed nations such as U.S. This is a serious cause of concern in sustainability circles as the demand for lithium-ion batteries is set to increase drastically in the upcoming years. In this context, it is quite imperative to mention that a few dedicated research programs are set to change current lithium ion battery recycling processes – a factor that would favor the growth prospects of battery materials recycling market. Moreover, these lithium ion battery recycling processes use half the energy required by conventional methods.

Speaking along similar lines, a few developed countries are constructing operational centers focusing on lithium ion battery recycling processes to lower their reliance on foreign sources of battery materials and gain a competitive edge in the recycling industry. Say for instance, the U.S. Department of Energy has recently launched the first lithium-ion battery recycling center of the nation to create profitable methods that would improve recycling rates of lithium, essentially boosting the U.S. battery materials recycling market share.

The system of circular economy came into existence due to an exhaustive debate on forming practical strategies that would ensure a sustainable future. Apparently, the evolution of the global recycling sector has supported the cause of circular economy where the material can be kept in the circle of production and consumption. Taking into account the formulation of SDGs with an unprecedented focus on recycling activities, enhancement in battery recycling processes, and a favorable outlook of governments toward recycling sector, the growth prospects of the worldwide battery materials recycling industry seem highly promising.