Apple has unveiled a fully revamped iPad Air alongside a faster version of its cheapest iPad and new Apple One subscription service.

The new fourth-generation iPad Air sits below the US firm’s top iPad Pro line while inheriting its more modern design.

The iPad Air has long been one of Apple’s most popular models, originally launched in 2013 and updated in 2014 and 2019 maintaining the same traditional iPad design with Touch ID home button.

The new fourth-iteration of the iPad Air ditches that long-standing design for one similar to the more modern iPad Pro. It features slimmer screen surround and a less rounded look with squared-off sides.

It has a larger 10.9in screen but in the same sized body as the previous generation tablet. But what it doesn’t feature is Face ID, instead relying on a new Touch ID sensor built into the power button on the top of the tablet for the first time.

The new model will also ship with Apple’s very latest A14 Bionic processor making it the first product from the firm to do so. The new chip, which will likely power the next generation iPhones too, is made on the 5nm scale making it one of the first chips from any manufacturer to do so, and 40% faster than the previous chip in the iPad Air.

The iPad Air also now has a USB-C port, replacing the older Lightning connector, stereo speakers, and a new 12-megapixel rear camera taken from the iPad Pro. The new mid-range tablet is also compatible with the second-generation Apple Pencil stylus and Magic Keyboard similar to the iPad Pro.

The new cheapest and mid-tier devices are expected to be popular, particularly as tablets have come into their own during the lockdowns and home-working associated with the Covid-19 pandemic in Europe and the US. 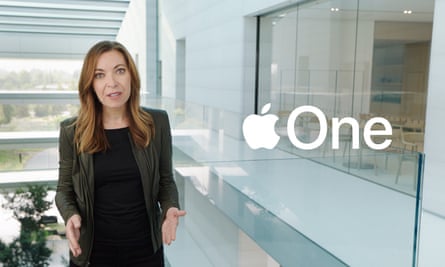 Alongside the new iPads, the iPhone-maker also announced the launch of a new all-in-one subscription plan called Apple One. The unified subscription brings together Apple’s disparate music, TV, news, games and storage services into one package, similar to Amazon’s Prime subscription.

There are three tiers of Apple One starting with Individual, which includes Music, TV+, Arcade and 50GB of iCloud storage for GBP14.95 per month. Family can be shared among up to six family members and increases the iCloud storage to 200GB for GBP19.95 per month.

The top tier plan called Premier adds Apple News+ and the new Fitness+ services, plus 2TB of iCloud storage, shared with up to six family members, for GBP29.95 a month.

The new subscription effectively sees a bulk discount and simplified billing, providing another avenue to generate revenue and lock-in users into the Apple ecosystem.

Apple also announced that its latest software update for the iPad and iPhone lines will roll out on Wednesday.

The new iPad OS 14 makes Apple’s tablet more like a Mac computer than ever, with upgraded search and a revamped interface that includes desktop-like side bars and toolbars. It also includes new handwriting recognition using the Apple Pencil stylus and on-device machine learning.

It also gets most of the new features headed to iPhones in iOS 14, including a new home screen layout system that involves widgets and an Android app drawer-like place to store apps that you don’t want on your home screen.

Siri has also been redesigned so that it floats over existing screens, rather than taking over the screen. Apple has also opened up the ability to set third-party apps as the default mail app, web browser and other bits for the first time.