The Galaxy Tab S7+ is Samsung’s unreserved attempt to beat Apple’s iPad Pro with an Android tablet designed just as much for work as it is for play.

Intended to compete with Apple’s top iPad Pro, it looks very similar in design. The 12.4in OLED screen is simply fantastic, rivalling the very best OLED TVs let alone smartphones and tablets. It has iPad Pro-like thin bezels around the edge of the display, flat metal sides, rounded corners and even antenna lines crisscrossing the metal back. 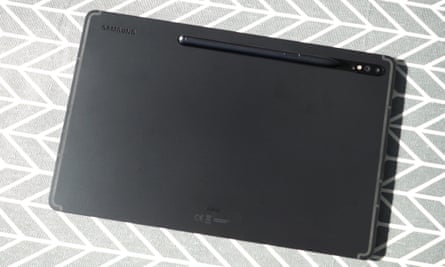 The screen has a 16:10 ratio, making it much wider than an iPad with its 4:3 ratio and more like a Microsoft Surface Pro.

The Tab S7+ has four Dolby Atmos-enabled speakers in the sides, which give stereo sound in either portrait or landscape orientation. Movies sound full and loud, while video calls come across clearly and naturally. The front-facing camera is good, too, but the microphones aren’t great at picking up voices from a distance, meaning Google Meet calls were better done from the desk than the sofa.

A larger version of Samsung’s excellent S Pen stylus, as seen in the Note series of smartphones, is included in the box and magnetically attaches to the back of the tablet for storage and charging. The stylus is excellent with pressure sensitivity, tilt support and low latency but having it attached to the back is a bit awkward. 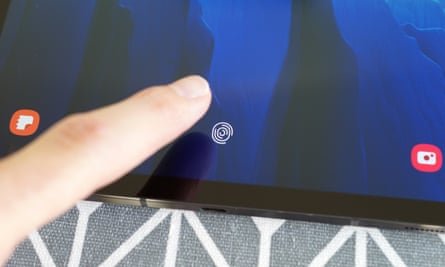 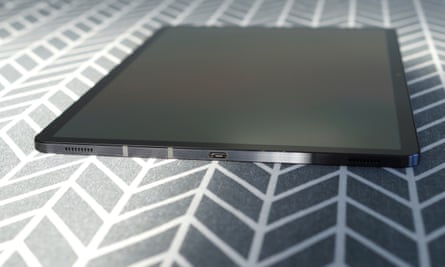 The Tab S7+ has Qualcomm’s latest top Snapdragon 865+ processor and 6GB of RAM, meaning it is the highest performing Android tablet available. Models with 8GB of RAM and 256GB of storage are available in some regions.

It handles any app or game with ease, plus multiple apps on screen at once. It lasts for more than 10 hours of productive work between charges when used like a laptop in Dex mode. That included having multiple tabs open in Chrome, Evernote, AI Writer, various messaging apps and lots of email, and various other bits used intermittently. That beats the 12.9in iPad Pro by two hours, when used in a similar manner. I expect you will get longer out of the tablet if just used for watching films or similar.

The Tab S7+ came with a disappointingly low-power 10W charger, which took about three hours to fully charge the tablet, but can charge at rates of up to 45W with higher-powered adapters that can be purchased separately.

Samsung declined to provide an estimate for the expected lifespan of the battery in the Tab S7+, which is typically 500 full charge cycles while maintaining at least 80% capacity for other rechargeable batteries. The device is generally repairable and the battery is replaceable by authorised service centres. Battery replacements will cost no more than GBP59.

Samsung declined to comment on the use of recycled materials in the Tab S7+ but does offer trade-in and recycling schemes for old devices. 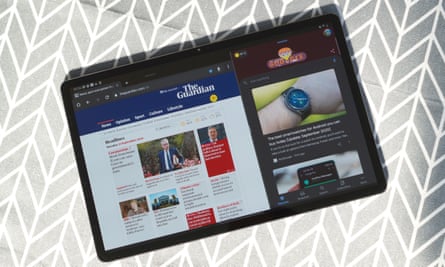 The Tab S7+ runs Samsung’s version of Android called One UI 2.5, which is based on Android 10 and also features on the company’s recently released smartphones but not the latest Android 11. An update to Android 11 is expected in the next six months. Samsung has pledged three years of major Android updates and quarterly security patches, which is still some way behind Apple’s five-plus years of software support for its tablets.

You can run up to three apps in a split-screen configuration and more as floating windows, much like the recent Galaxy Z Fold 2. Mostly it works fine but some apps refuse to run in landscape mode, forcing the tablet into portrait mode when launched.

But to make the most out of the tablet as a work device Samsung also includes an upgraded version of its Dex system, which essentially turns Android into a desktop-like computer complete with apps in windows, full mouse and keyboard support, a task bar at the bottom of the screen and other elements similar to Windows or macOS.

Dex works very well within the confines of Android. Most apps can be used in windows and resized just fine. Samsung’s own apps all run fine but even those third-party apps that work in Dex have quirks that you have to adapt to. Some don’t like being resized and effectively quit and relaunch when you expand or shrink their windows, which can get annoying if the app is protected by a pin or similar. Other apps, including password manager LastPass, simply won’t run in Dex mode, which made it a hard sell for my particular usage. 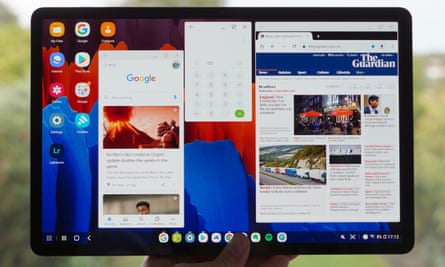 Chrome on Android is also not good enough to be a desktop browser. It struggles with heavy web apps and doesn’t support drag and drop, which means some of the systems I use for work do not operate correctly. Right click is also hit-and-miss and it’s hard to select text with a mouse.

To make the most of Dex you need a keyboard and mouse. Third-party devices work well enough but really it is designed to be used with Samsung’s Keyboard Cover, which is an additional GBP219. The Keyboard Cover is a two-part case. A back cover attaches to the tablet via magnets and includes a good kickstand, while the keyboard attaches to the ports on the bottom of the tablet.

The keyboard and trackpad are pretty good but the keyboard attachment to the tablet is not rigid enough to be comfortably used on a lap. It is simply nowhere near as good as the Surface Pro’s type cover keyboards, which are GBP100 cheaper. 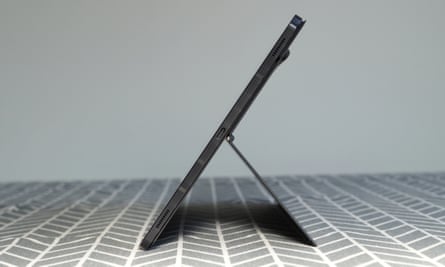 The S Pen is included in the box but the Keyboard Cover costs an additional GBP219.

There’s no doubt the Galaxy Tab S7+ is the best tablet Samsung has ever made. It is leagues ahead of the company’s previous efforts and most definitely the best Android tablet you can buy, too.

But despite all the software additions Samsung has made to Android to make it a more powerful work machine, it falls short of being a good laptop or Windows tablet replacement. Apps can be unpredictable, unstable or simply don’t work when in Dex mode. That’s fine for casual things but if an app quits and loses work, that’s simply not acceptable.

The iPad Pro has its own problems as a PC-replacement but app instability isn’t one of them. Chrome on Android also isn’t up to the task of being a proper desktop browser, not in the same way the iPad’s Safari.

That’s not to say the Tab S7+ isn’t a fantastic gaming, video-watching, casual browsing and entertainment device – it really is the best tablet you can buy for media consumption. The screen, the battery life, the performance, the design and build are all top-notch, and the S Pen is excellent.

But GBP799 is an awful lot of money for a media consumption tablet and if you add the GBP219 Keyboard Case, GBP1,018 puts it next to tablets and computers it can’t match for getting work done. 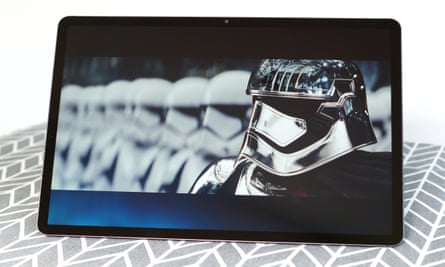