Until now, it’s all been marketing. Every feature, every technological advancement, promised for the PlayStation 5 and Xbox Series X, have been untested. But over the last three weeks, Microsoft has been sending out preview units of the Series X to journalists around the world. Just as the company blinked first and announced the price and launch date of its next machine before Sony, it is now allowing proper scrutiny of the hardware before its competitor.

The console we’ve been testing for the past week is not the final product and its user interface is apparently not what we’ll see at launch – this is usual for the initial run of review consoles, which tend to be based on the debug units used by game developers. Consequently, we’re limited in terms of what we can cover. But even at this stage, and with these limitations, this is an impressive and exciting console. Here’s what we found. 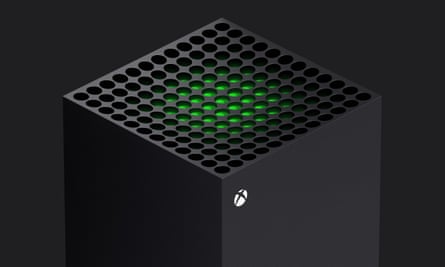 When I first took the Series X out of its box, it was smaller than I expected – I had been readying myself for something the size of a PC tower, and though its stark, minimalist design is reminiscent of an office computer, it’s not quite as tall or chunky (the dimensions are 30.1cm x 15.1cm x 15.1cm, with a weight of 4.45kg). It is, however, twice as wide as the Xbox One X at 15.1cm, and is a commanding presence beneath your TV. Design-wise, it’s certainly not a statement in the same way as the PlayStation 5, but it is sleek, smart and monolithic, like a really expensive piece of home theatre equipment. The one flourish is the slightly concave topside, with its matrix of circular airflow holes, which are coloured green inside to provide a hint of Xbox’s signature colour – a nice, subtle touch. You can also place it horizontally rather than vertically and this way it should still fit in most media units.

On the front, there’s the Blu-ray disc slot, plus a single USB port and a button to sync your controller. At the rear, it has a single HDMI slot, which is compatible with the new HDMI 2.1 cable standard allowing frame rates of up to 120hz, although you’ll need an HDMI 2.1-compatible TV to take advantage of that (if you’re not bothered about 120hz frame rates, your current TV is fine). You’ll also find two more USB slots, power cable port and ethernet port. There’s no slot for Kinect, so goodbye strange motion control experiment!

Finally, there’s an expansion slot, which currently supports a dedicated 1tb expansion card from Seagate. This will cost you another GBP220, but it’s the only SSD expansion product compatible with the machine at present (Microsoft’s Jason Ronald has explained why in a blog post), and you can load games directly from it. Other expansion cards should be coming out later. You’ll also be able to plug in a USB 3.1 hard drive for extra games storage, but you won’t want to be running anything straight from those as you’ll lose the speed benefits of SSD. 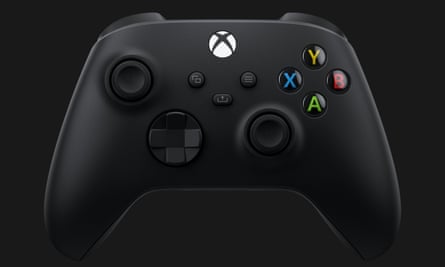 The new controller looks very similar to previous models, with a couple of key changes. The hand grips and the triggers have a more pronounced textured surface, which feels nice and should aid grip on longer play sessions. The D-pad is now circular rather than cross-shaped, potentially making combos more accessible on fighting games. It feels like the haptic feedback motors have been upgraded: there’s a nice little physical “dink” you get when passing over menu options on some games that feels very precise, like a smartphone touchscreen. There’s also a new Share button right in the centre, mimicking the PlayStation DualShock 4 pad, allowing you to quickly take and share screenshots and video clips. Add in the USB-C port for connecting to your console and this is a subtle evolution rather than something completely new.

Currently, we’re not able to play any Xbox Series X launch titles, or indeed any of the current generation titles that have been specifically enhanced for the new machine. However, we did have access to the growing catalogue of un-enhanced Xbox One games that will be playable on the new system. One thousand titles are supported on Series X right now including first-party titles such as Forza Motorsport, Sea of Thieves, Gears of War 4, as well as big third-party titles Rise of Tomb Raider, Assassin’s Creed Odyssey, Sekiro and Hitman.

What we’re finding is, games that struggled with slowdown on Xbox One, especially in hectic moments, or that used dynamic resolution to reduce visual detail when needed, are now performing with smooth, consistent frame rates in high resolutions on Series X. Eurogamer discovered this with Doom Eternal, Monster Hunter World and Modern Warfare 2019, while Gamespot was impressed with Final Fantasy XV. From these early tests it looks as if we can expect most Xbox One X Enhanced titles that support 4K and up to 60fps via dynamic resolution to perform at full frame rate and high visual fidelity on Series X.

There’s also seamless cross-generational compatibility, so I could play Apex Legends and Fortnite on Series X against my friends on Xbox One with no trouble. This is going to be really important considering that comparatively few next-gen consoles will be out there for the first few weeks. 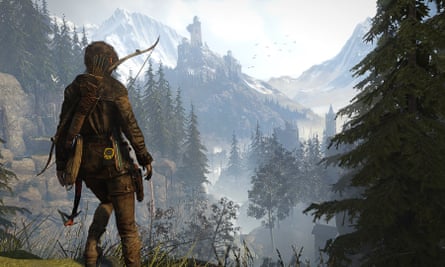 Thanks to the SSD and Microsoft’s Xbox Velocity Architecture technology, loading times are significantly reduced on Series X, both when booting up a game and loading levels and map areas while playing. Red Dead Redemption 2 boots to the main menu in 30 seconds compared to a minute and a half on the Xbox One; Apex Legends loaded to Menu in 25 seconds compared to 50s on its predecessor. (Tech site The Verge has a long list of titles and loading times to compare, and most show big improvements.) However, it’ll be interesting to see how quickly native Xbox Series X titles boot up and load levels considering they will be placing a greater strain on the hardware.

My goodness, it is quiet. It is so, so quiet. While idling, all you get from the console is the barely audible hum of the machine’s single cooling fan. It’s like a very new and expensive fridge. Even during busy, graphically demanding showdowns in Red Dead, Hitman and Assassin’s Creed Origins, it barely raises above a whisper, and of course with the SSD drive, we’re also spared the clunks and whirs of a hard drive. Again, none of these titles are challenging the CPU and graphics processor quite as much as Xbox Series X titles will, so we’ll see if this impressive near silence can be maintained.

When Microsoft announced this neat new feature, the promise was that you would be able to run several games at once and then instantaneously swap between them whenever you liked (unlike the Xbox One and PS4, which require you to save and quit previous titles in order to start a new one). We can confirm, it works really well – although the swapping process is not quite immediate. When you leave a game, it takes around 10 seconds to start another one, but then sure enough, you’re right back in the action where you left off.

For players with short attention spans, this is going to open up a whole new world of channel surfing video games. It’ll also let you mix up your play really easily, allowing you to, say, fit in the odd Fortnite session between punishing Sekiro missions.

At this early stage, with no access to new games, we’re limited as to what we can conclude about Series X. Right now, the Quick resume feature and faster loading times are the most impressive new additions that will have a real effect on how we play games, and from the hardware to the smoother running of back catalogue titles, everything feels really robust. There’s a lot to build from here, but the next generation of Xbox hardware has very, very strong foundations.