Michigan terror plot: why rightwing extremists are thriving on Facebook

In a year of escalating political violence in the United States, Facebook has served as a key organizing tool for violent extremists.

An alleged plot to kidnap the Michigan governor, Gretchen Whitmer, was planned in part on Facebook, with one leader of the scheme broadcasting a video of his frustrations with Whitmer to a private Facebook group, and participants later sharing footage of their paramilitary exercises and bomb-making training, according to an FBI affidavit.

Before Michigan, there was the militia group in Kenosha, Wisconsin, that used a Facebook event to encourage armed citizens to take to the streets, and the anti-government “boogaloo” cop-killer in California this May allegedly met his accomplice on Facebook. The deadly neo-Nazi rally in Charlottesville, Virginia, in 2017, was originally organized as a Facebook event.

Facebook has defended itself as working hard to keep users safe and to adapt to emerging threats on its platform, as well as coordinating closely with law enforcement. But evidence has mounted for years that Mark Zuckerberg’s goal of using Facebook to “bring the world closer together” and to “give people the power to build community” has also built powerful tools for radicalization and coordinated violence. 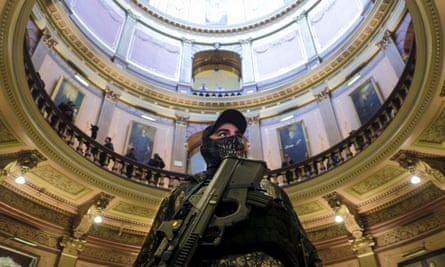 Facebook suggested this week that its conduct in the Michigan case had been “proactive” and exemplary, and that it had played an important role in flagging extremist content to law enforcement authorities. A spokesperson said the company had “proactively reached out and cooperated with the FBI” to provide information for the Michigan investigation more than six months ago.

“We remove content, disable accounts and immediately report to law enforcement when there is a credible threat of imminent harm to people or public safety,” a Facebook spokesperson said.

The FBI said in an affidavit that its Michigan investigation began when it “became aware through social media that a group of individuals were discussing the violent overthrow of certain government and law-enforcement components” in early 2020.

Matt Perault, a former Facebook public policy director who leads a center for technology policy at Duke University, argued that the Michigan case should be seen as an example of Facebook being part of the solution to dealing with extremist radicalization in the US.

“The data is pretty clear in this case that the ability of an informant to join a Facebook group to identify the conduct, and Facebook’s work with law enforcement, seems like it was pretty helpful,” he said, apparently helping “to head off a horrific event before it occurred”.

But federal authorities’ descriptions of a rightwing plot to kidnap a Democratic governor, put her on “trial” as a tyrant and instigate a civil war, have also renewed questions about whether Facebook’s current strategy for policing extremism on its platform is adequate, or whether the company needs to fundamentally rethink its approach, acknowledging that what’s good for Facebook may be bad for democracy.

While dangerous groups can and do organize across many different platforms, Facebook is “uniquely dangerous” because it is designed for “algorithmic recruitment”, Evan Greer, the deputy director of digital human rights group Fight for the Future, wrote on Twitter on Thursday. 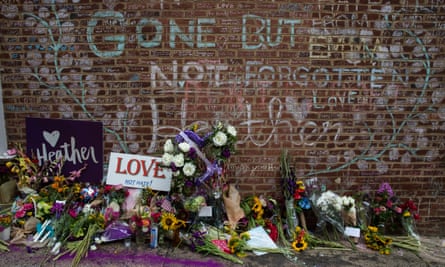 Facebook has often framed the discussions of how its platform has been used by violent extremists as a question of “free speech”, but many critics say that misses the real issue about the ways in which the company uses its algorithms to recommend extremist content and extremist groups to its users.

“It’s one thing to provide a forum where people can say what they want, even if it’s controversial,” Greer told the Guardian. “It’s a totally different thing to actively help violent bigots recruit other violent bigots into their group using data harvesting and algorithmic recommendations.”

When researchers at the Network Contagion Research Institute began mapping the spread of anti-government “boogaloo” rhetoric on the platform in early 2020, the co-founder Joel Finkelstein said, Facebook began offering up advertisements for purchases relevant to their interest in a coming civil war.

“It started sending us ads for the boogaloo. Buy a boogaloo bag. Get a boogaloo AK-47 inscription on your gun,” Finkelstein said. “That was shocking.”

“We realized the algorithms of Facebook have never met an apocalyptic, militant cult set on killing cops that they didn’t like, and couldn’t merchandise.”

The Michigan kidnapping plot, and related charges against members of an anti-government militia, are a new case study in the role Facebook has played in emerging extremist threats. Authorities said they had arrested 13 men in connection with violent plots against elected officials and law enforcement officers.

Early details suggest at least some of the alleged Michigan plotters identified with “boogaloo” ideology, a nascent rightwing movement obsessed with civil war and insurrection, which spread rapidly on Facebook in late 2019 and early 2020. Officials described seven men facing terrorism charges as being part of an anti-government militia group, the Wolverine Watchmen, and said the “commander” of the group was known online as “Boogaloo Bunyan.”

The algorithms of Facebook have never met an apocalyptic, militant cult set on killing cops that they didn’t like, and couldn’t merchandise

Facebook has updated its policies related to violent extremist groups multiple times this year, including taking down a network of boogaloo groups as a dangerous organization in June, and then restricting militia groups in late August, as part of a crackdown on groups that did not meet the company’s criteria for being dangerous enough to ban, but that did “have demonstrated significant risks to public safety”.

As part of a “strategic network disruption” of boogaloo groups on 30 June, Facebook removed a group for the Wolverine Watchmen, the company said.

As companies like Facebook are pressured by activists to take down material from extremist groups, they may also be juggling requests from law enforcement “to leave up material that prosecutors could use to prosecute people”, Perault noted. Social media activity “makes information visible that might not otherwise be visible”, and can be crucial to building criminal cases.

“Tech companies are not going to be able to solve the issue of people doing terrible things,” Perault said. “People will do terrible things using any communication technology they have access to, including more traditional technologies like phones.”

But some analysts said Facebook’s action in addressing both the “boogaloo” groups and militia organizing this summer was starkly overdue.

Armed militia groups in the United States have an extensive, well-documented history of deadly violence going back to the 1990s. 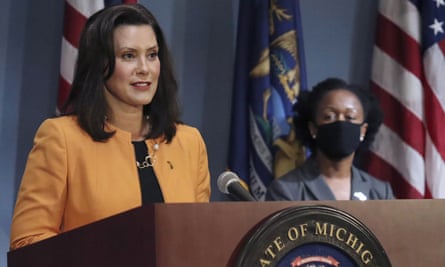 “From 2008 to 2020, Facebook was sort of the chosen social media platform of the militia movement,” said Mark Pitcavage, a senior research fellow at the Anti-Defamation League’s Center on Extremism. “That’s a solid 12 years that the militia movement thrived on Facebook.”

Facebook’s belated action to restrict the militia groups in late August had an effect on the broader movement: they “nuked” it, with many groups and pages taken down, Pitcavage said. “It really made a big crater.”

“It would have been better if they had done it in 2008,” Pitcavage said, but he appreciated that it was better that the company to take action now than “in 2022 or 2024”.

At times, Facebook has chosen not to significantly restrict or ban extremist groups on its platform until after a member of the group has killed someone, even when experts have sounded warnings about the group for months or years before an attack.

This was true of boogaloo groups on Facebook. A February 2020 report by the Network Contagion Research Institute warned about the growth of boogaloo rhetoric on Facebook, specifically that it included violent rhetoric about killing law enforcement that might translate into action. After the report was made public, Facebook told NBC News it was monitoring the groups for threats of violence, but did not take any immediate action to ban boogaloo groups, even through violent insurrection and killing law enforcement were central themes of boogaloo discussions.

The company finally announced a ban on a network of boogaloo groups on 30 June, four months after a clear public warning that a cop-killer ideology was spreading on Facebook, and nearly a month after two officers in California had already been shot to death: the federal security officer David Patrick Underwood, on 29 May in Oakland, and the California sheriff’s deputy Damon Gutzwiller, in a subsequent ambush attack.

Early details from Michigan suggest that one of the groups linked to the plot may have been active on Facebook for eight months before the company finally designated them as part of a dangerous network. 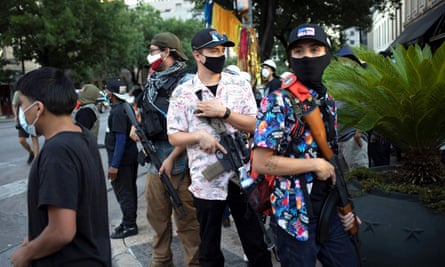 Michigan state police described the Wolverine Watchmen in an affidavit as a militia group that “engaged in firearms training and tactical drills to prepare for the ‘boogaloo’, a term referencing a violent uprising against the government or impending politically-motivated civil war,” and said that they had “recruited members using a social media platform, Facebook, since November 2019”.

Facebook took down the Watchmen group on 30 June 2020. A spokesperson said that if the Wolverine Watchmen group had been identified as a credible threat earlier, it would have been removed at an earlier time.

It was the “acts of real-world violence” by movement adherents in the spring of 2020 that led Facebook to designate a boogaloo network as a dangerous organization and ban it from the platform, a company spokesperson said in June, but it had been monitoring the movement closely since 2019. Facebook had been identified elements of the boogaloo movement “as far back as 2012”, a spokesperson said, and had been monitoring monitoring debates inside the movement over “whether to instigate violent conflict or be prepared to react when it occurs” for months before it finally announced a ban.

Some activists are now pressing Facebook not only to move faster in banning dangerous groups from its platform, but to fundamentally rethink the way it shares and promotes content, and suggests connections between different users.

Finkelstein, the Network Contagion Institute co-founder, said that Facebook did not currently have enough incentive to regulate itself, since extremist content was very engaging. “It’s not in their financial interest” to change, he said. “They’re creating social hazards in ways that we can’t police.”