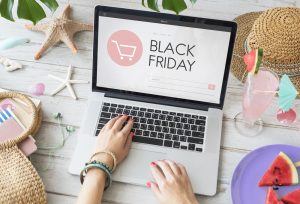 Black Friday is expected to smash online sales records this year as struggling retailers slash prices in a desperate attempt to drum up trade after a lost November on the high street.

The discount day has become the biggest shopping event of the year but the stakes are far higher this time round as coronavirus restrictions mean some retailers have shops closed in three of the four home nations.

The virtual high street has already gone into overdrive. Last week online sales were 56% higher than in 2019, according to the internet industry body IMRG, with the stellar run of growth pointing to a “record-breaking month for online retail”.

Richard Lim, the chief executive of Retail Economics, said the success of Black Friday was easy to explain: “Consumers love discounts. If shoppers are looking to bring forward their Christmas shopping, retailers don’t want to lose market share to their competitors. They have to have skin in the game.”

Black Friday 2020: five things to consider before buying that ‘bargain’
Read more
Some retailers have been running Black Friday promotions since the start of November but the volume of the deals has increased in recent days. It reaches a crescendo on Friday as companies set out their stall for a long weekend of shopping.

Fashion chains have been among the hardest hit by the shift to homeworking and curbs on socialising – and some of the striking deals reflect that. Asos is offering up to 70% off, while its rival Boohoo is slashing prices by up to 90%.

With Covid curbs creating pent-up demand, there is some good news for struggling retailers, with eight in 10 shoppers planning to make a Black Friday purchase, according to the personal finance website money.co.uk.

Salman Haqqi, a finance expert at money.co.uk, said its research found one in 10 shoppers were planning to spend much more on Black Friday than last year, with £350 the average outlay.

Clothes were top of the list, he said, with about half of those polled looking for a fashion bargain, followed by beauty and grooming products. Games consoles, smart TVs and mobiles were also on shoppers’ radars.

While Britons have traditionally used Black Friday to start their Christmas shopping, concerns about the impact of store closures mean some people have started even earlier this year.

Tesco, which started its Black Friday campaign on Tuesday, has already sold out of the coveted Nintendo Switch console. However, the device is among the Black Friday bargains that will go live on Aldi’s website at midnight.

Currys PC World launched its deals, which include discounts of up to 30% on products ranging from flatscreen TVs to laptops and home printers, on Thursday night, while its sister chain, Carphone Warehouse, will run “limited time” offers on handsets over the weekend.

Over three days, shoppers are expected to spend £7.5bn, according to a Centre for Retail Research (CRR) report for Vouchercodes.co.uk. That would be 12% less than in 2019 and the first drop in total sales since the US-inspired event arrived in 2013. The fall in spending has been blamed entirely on lockdown store closures.

During the spring lockdown, stores missed out on £1.6bn of sales a week, according to the British Retail Consortium, but the significance of the festive period means that figure is estimated to be £2bn of sales a week.

The diverging fortunes of real and virtual stores is writ large in the CRR’s forecasts, which predict online sales will be nearly £2bn higher at £5.8bn while stores will lose out on £3bn of business, to take just £1.7bn.

The sock brand Chatty Feet will be donating a fifth of sales via its website to the homelessness charity Crisis, while the footwear brand Allbirds is donating £2 from every sale to the Fridays for Future movement founded by the climate activist Greta Thunberg.