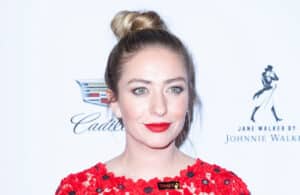 The creator of a dating app that puts women in charge is among the new names to join the ranks of the mega-rich after becoming the world’s youngest female self-made billionaire.

Whitney Wolfe Herd, (pictured) 31, is worth $1.3 billion (£940 million) having co-founded Bumble, which allows only female users to make the first contact with a man.

She is one of 328 women on the Forbes list of the world’s 2,755 billionaires published yesterday.

The number of women on the list has grown by 36 per cent over the past year and in total they are worth $1.53 trillion, an increase of nearly 60 per cent. A new billionaire was created every 17 hours during the pandemic.

Wolfe Herd created Bumble in 2014 after resigning from the dating app Tinder, where she was an executive. Her complaints of sexual harassment while working there were denied by the company, which agreed a $1 million settlement. Wolfe Herd held her one-year-old son, Bobby Lee Herd II, as she rang the opening bell on the Nasdaq stock exchange when Bumble was floated in February. She said she hoped that more women would lead companies to the stock market, telling Bloomberg: “It’s the right thing to do, it’s a priority for us and it should be a priority for everyone.”

Wolfe Herd, who is married to Michael Herd, an oil heir, has described being inspired to set up her “feminist app” from her own dating experiences, saying: “I always wanted to have a scenario where the guy didn’t have my number.” It has more than 35 million users.

Miriam Adelson, 75, of Nevada, is the richest female newcomer, at $38.2 billion. She inherited her husband Sheldon Adelson’s casino empire after his death in January. Jeff Bezos, 57, is the world’s richest person for the fourth year running. The Amazon founder is worth $177 billion, up $64 billion from a year ago. His former wife, MacKenzie Scott, 50, is worth $53 billion, compared with $36 billion last year, despite pledging to giving her wealth away “until the safe is empty”.

Denise Coates, 53, the founder of the gambling website Bet365, is the wealthiest self-made British woman with a fortune of $6.5 billion (£4.7 billion).

However, the wealthiest British-based women inherited their fortunes. The Dutch-British brewing heiress Charlene de Carvalho-Heineken, 66, is the richest at number 161, with a $16.7 billion fortune. Kirsten Rausing, 68, the Swedish-British heiress of Tetra packaging, was the second-placed British woman with a $13.9 billion fortune.

Lidiya Mikhailova, 63, who lives in London, was the only British woman to enter the list, with a $1.3 billion fortune thanks to her control of Cherkizovo Group, a meat producer founded by her former husband Igor Babaev. Camilla de Godoy Bueno Grossi, 42, who also lives in London, saw her wealth soar to $3.1 billion due to her stake inherited from her father in the Brazilian laboratory services firm Diagnosticos da America. Anne Beaufour, 57, is worth an estimated $2 billion thanks to her inherited shares in Ipsen, France’s third-largest pharmaceutical company.

The pandemic has created 40 billionaires who got super-rich fighting Covid-19, according to Forbes, which warned the increasing disparity between billionaires and the rest of the population could threaten the “modern social order”.

None of the 40 new billionaires whose status is attributed to Covid is from the UK. Fifteen are from China and nine from the US. Beijing has overtaken New York as the city with the greatest number of billionaires.

Li Jianquan, 64, whose Hong Kong-based company makes masks, protective overalls and gowns, entered the list with a $6.8 billion fortune. Stéphane Bancel, 48, the French chief executive of the vaccine manufacturer Moderna, is now worth an estimated $4.3 billion.

Randall Lane, editor of Forbes magazine, wrote: “These figures will engender endless amounts of consternation, most of it justified. There’s no getting around a collective $5 trillion wealth surge during a pandemic, when most of the world felt scared, sick, besieged.

“Capitalism, the greatest system ever for generating prosperity, rests upon a social compact of expansion, unequal by design, ultimately lifting all boats. The Covid-19 economy has strained that concept; yawning economic disparity poses arguably the greatest threat to modern social order.”

The reality TV star Kim Kardashian West, 40, entered the list at 2,674 with an estimated $1 billion fortune. Her wealth was boosted by revenues from her lucrative cosmetics and clothing ventures. She has mocked those who have questioned her abilities, saying “not bad for a girl with no talent” after making the cover of Forbes.

Elon Musk was propelled into second place with his $151 billion fortune, up by $126.4 billion due to a surge in the value of shares in his electric car maker, Tesla.